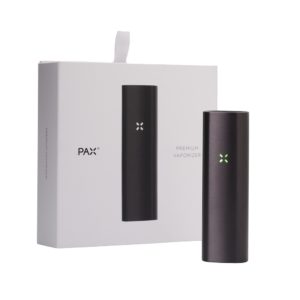 The PAX 2 is the herbal vaporizer with probably the most futuristic design you will ever see. It’s designed in San Francisco, CA and is the successor of the first PAX vaporizer, the PAX 1. This vaporizer it packed with features so let’s see what we get in the box and what you can expect if you decide to buy it.

As you can see from the image above the PAX 2 Vaporizer package contains the actual PAX 2 vaporizer, two silicone mouthpieces, a magnetic charging cradle with USB cord and the PAX 2 cleaning kit with isopropyl alcohol and pipe cleaners. But the real magic is inside this vaporizer. One more thing I want to add before going over all the features is that there are 4 available colors black, topaz (aqua), red and silver with the black one being the most popular and I believe that’s because of the increased discreetness it offers. The black model really does not look like a vaporizer so if you’re looking for something discreet then the black one might the best option for you. As far as I’m concerned all colors look incredible as the polished aluminum really makes the color shine and also create a very nice feel to the touch.

After you’re done un-boxing the PAX the next thing you need to do is charge it. You do that with the charging cradle and connect it to a USB outlet or power source and as soon as you do that you will see the 4 PAX led lights light up and pulsate. A full charge takes 3 hours and that translates into about 90 minutes of usage. But as far as battery goes the PAX 2 has got some stand-by features that are only there to help so battery life should not be an issue for you whatsoever. Worth noting that the motion sensor technology really does save you a tone of battery.

After you’re done charging it it’s time to select one of the two silicone mouth pieces. Both are silicon rubber inserts which means no more mechanical parts to remove. One is an interior one – flat – which has a small opening at the top of the vaporizer and works rather well and then there is the raised mouth piece which is nice as well only kind of takes away from the overall design. But it’s up to you to decide which you prefer.

Below you can see how easy it is to use the flat mouth piece. And also worth noting is that with both mouthpieces there are built in lip detectors which help with the battery and preserving more of your herb (although I do have my doubts about this feature being able to save your herb).

Once you’ve decided on the mouth piece the next step before actually using it is to load it up. And you will do that at the opposite side of the mouth piece in the oven which is 20% deeper than the previous model. The oven has a magnetic lid this is easy to open by pushing on what side of the lid.

After you have changer it and filled up the oven chamber we can get into the most interesting parts of this vaporizer. The guys at PAX Labs tried to make this vaporizer as easy to use as possible and to some extend they have managed to fulfill their mission. You don’t have any LED screen with this product but you do have the 4 PAX LED lights which successfully replaces the need for an LED screen as those 4 lights can communicate a lot of stuff.

Besides the LED lights which are important for the vaporizer to communicate various things – that we will talk about in just a second – the other important thing is the button situated where the mouth piece is located.  Now let’s go over what you can do pressing by pressing this button and what the LED light will be communicating in effect.

So when you want to take your first hit you start by pressing the button up top after which the PAX LED light start to pulsate in a pink/purple color. This means that the PAX 2 Vaporizer is on and the heating process has begun. The heating process is relatively quick taking under 1 minute in total and then the lights turn to green. The green color means you are good to go.

And that is pretty much it as far as taking your first hit. But of course there is more. As I’ve mentioned before there are built in battery and herb saving features with the help of the built in motion sensor. So imagine you’ve taken a hit and put it down. What happens then is that you might see the vaporizer LEDs turn blue which means the vaporizer has shifted into lower temperature mode thus saving your herb and some battery. And it will stay in this blue stage up to 3 minutes after which it will shut off. But as soon as you pick it up it will switch back on and since it also has a lip sensor it has the built in technology to recognize how hard your pulling and it adjusts the temperature in order to keep it constant.

And since I’ve mentioned the temperature I should specify that there are 4 available temperature setting (360°, 380°, 400°, 420° ). In order to see what setting the vaporizer is on as well as to set it all you have to do it hold the top button until you see the lights change to red and then push again until to hit the desired level. If all 4 lights are lid then it’s at the highest temperature setting and the lights will be red, if there are 2 red LEDs lit then it’s at the second and the lights will be orange. Once you have the level set just push the button for a few second again until the lights turn back to the pink-ish purple. It’s that easy. Personally I found the second and third levels to be the best but you can choose the one that fits you best.

Two more things I want to add about the LED lights. One is that if you want to check the batter level all you have to do is shake the vaporizer and it will indicated the batter level in a white-ish color. 4 LEDs means full battery while 1 LED means you should probably charge the PAX 2. And the second is the available “party mode” where you simply turn the PAX 2 vaporizer round and round and the 4 LED change colors and start to go wild. It’s a nice feature to be included as it gives it personality but pretty useless to be honest.

Now that I’ve covered about all the features of this vaporizer I also want to add a few thoughts. One is the fact that I thought that the design was pretty nice, as you can easily take this small gadget anywhere with you and hold it on you hand. It is very discreet but when I used there is a smell there close-by during the heating process. For most people that’s not a problem but I wanted to add that in case you bought this for absolute discreetness. Then I also noticed that unless you have a fine grind the oven tends to not distribute that even burn especially when you take breaks and it goes into standby mode.

But I really liked the quality of the smoke as it’s smooth and consistent. And I really liked the feel I had while holding it as it has the nice brushed metal finish. Additionally I forgot to mention another thing which I found very important and that’s the fact that this product comes with a 10 year warranty. I like to know I have that piece of mind if anything goes wrong.

Overall I’ve come to like the PAX 2 Vaporizer quite a lot, it’s sleek and stylish and hard not to fall in love with it. It’s probably the best vaporizer out there but it’s surely one of the best. If you’re looking to a portable vaporizer that has a nice design and works very well than this might be the right vaporizer for you.