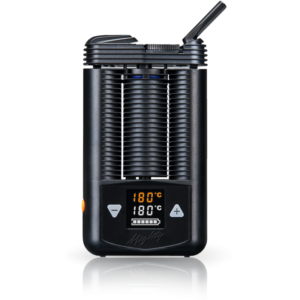 The Mighty is probably one of the best portable vaporizers on the market due to it’s functionality and vapor quality. Originally released in late 2014, it’s made in Germany by Storz & Bickel who are a well known company in the industry with other popular products such as the Crafty portable vaporizer and the Volcano desktop vaporizer. Although this device is considered a portable vaporizer, it’s considerably larger than other vaporizers – both in size and weight – like the PAX 3 or Firefly 2, so I would categorize it more as a extremely portable and cordless desktop vaporizer and  when I say that I take in consideration the vapor quality and what it can do overall. It is a combination between a convection and conduction vaporizer which along with the cutting-edge thermal engineering features makes it a top of the range product.  So if you’re looking for a vaporizer that represents the very best of German engineering quality and discreetness is not a factor, than this vaporizer is the right one for you.

Besides the actual vaporizer the box comes with a few other items: the wall power adapter, a plastic – but rather good – grinder, a plastic loading device, a very useful cleaning brush and other accessories like a liquid pad, three replacement screens and replacement plastic seal rings. Worth mentioning is that you also get a filling chamber tool that is in the vaporizer at the bottom under the type label.

Despite many components being plastic, this device gives you the feeling of being extremely well built and, above all, highly durable. At the top you have the cooling unit with the mouthpiece. This unit detaches in order to access the oven which is situated in the middle of the device while on the sides we have the rechargeable non-removable batteries. On the side we have the power button and charging socket while on front of the bottom half we have two buttons for adjusting the temperature and the LCD screen which displays the current and set temperature as well as battery life.

And speaking of battery life, this is an aspect where the Mighty excels given it’s dual battery construction. It takes about 2 hours for a full charge lasting around just as much .A feature I like a lot is the fact that you can actually use the device while it charges. It’s not uncommon to forget to charge your vaporizer and not have it instantly available when you want it can be frustrating, but with the Mighty if you’re out of battery just plug it in and you’re good to go.

As mentioned earlier the heating chamber is situated in the center of the unit. In order to access it you first need to remove the top cooling device with a simple twisting motion.

Packing the oven is easier than with any other vaporizer as the included filling aid along with the packing tool ensures that you fill your heating chamber perfectly every time.

The filling aid is a rather smart 4 piece plastic tool that looks a lot like the included grinder and can also be used as a small container. It works like this.

You have the bowl with the plug that contain your material and fit in perfectly with the oven of the vaporizer. Firstly you unscrew the lower cap of the filling tool and then you twist it into place after which you unscrew the upper cap and remove the plug and use it to fill the oven through the central opening.

After you have packed your oven you can remove the filling aid and have a perfectly packed vaporizer which no spillage. But in all do honesty, due to the design the Mighty is easy to load and unload even without this filling aid.

You also get the packing tool – which is different from the filling aid – that is situated at the bottom of the vaporizer below the type label.

You can use it to pack the herb in the oven a bit tighter as is recommended – but not too tight as you want to air to pass through. As a side note, the packing tool is also useful when removing the blue plastic rings and screen from the cooling unit as we will see a bit later.

So the filling process is pretty straight forward but I do want to mention a couple of things here. It is recommended that you pack the chamber up to the blue plastic ring holding up to around .3g.

Once you have filled the heating chamber you can put the cooling piece back on and start the vaporizer with one push of the power button. The vaporizer will vibrate once to signal that it’s turned on and will start heating. You will notice the LED screen turn on as well and temperature to rise. The temperature can be set anywhere between 104 F and 410 F (40 C and 210 C). In order to switch between C and F and vice versa you simply need to push the plus and minus button simultaneously. It will take about 60 seconds for the vaporizer to heat up and once its done it will vibrate twice and that’s when you know you can start vaping.

If you’ve used other portable vaporizers you will notice just how outstanding the vapor quality is with this particular device compared to the others. It’s similar it is to what you would get with a desktop vaporizer. Cool and smooth vapor that is consistent and with plenty of taste. And this goes for both herbs and concentrates.

A few things to mentioned here would be the auto shut-off function that is set to 60 sec. This time is a bit too short and although the vaporizer has a built in function that detects when you are vaping and resets this timer each time you pull, it does not work each time and in order to reset this timer it’s recommended you push the power button. Also, when the it does auto shut-off it does vibrate so you will both hear it and feel it. It would have been nice to see this auto shut-off set to around 3 min, but in the end it’s not that much of a big deal.

Cleaning the vaporizer is a relatively easy process as well. Emptying the heating chamber after use is fairly simple but a complete clean is recommended every few months. By this I mean cleaning the cooling unit as well as the oven. As you can see below, the cooling unit is made up of a series of parts, the mouthpiece, the plastic rings, the screen which all need to be disassembled and properly cleaned with isopropyl alcohol.

Also worth mentioning that there are some good extra packages you can purchase with the Mighty. The one that I would recommend the most is the Mighty Wear & Tear set where, for a modest price, you get an extra cooling unit, three mouthpieces, 6 extra screes, 4 liquid pads, a brush and two packing tools.

Overall this is probably the best portable vaporizer on the market made by a manufacturer that is know to deliver nothing but the best products. It is extremely easy to use, build to last despite the many plastic components, the dual battery which last a lot longer than any other similar device and it comes with a 2 year warranty while in terms of vaping delivers the best experience similar to what you would get to a more expensive desktop vaporizer. I fully recommend this vaporizer.