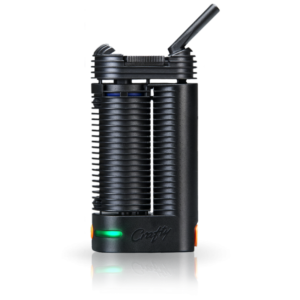 The Crafty vaporizer is a portable vaporizer that is known for delivering outstanding result. It’s manufactured in Germany by Storz & Bickel who also make a lot of good and high quality products as well as the Mighty Vaporizer which is essentially Crafty’s big brother. In many ways the two are alike the difference being the overall size as this device is a one battery vaporizer and the Mighty is a dual-battery vaporizer. Also the Crafty lacks an LCD screen but it makes it up through the availability of a smartphone app.

Besides the actual vaporizer the box also contains a USB charging cable with a wall power adapter, 3 replacement screens, one liquid pad for concentrates, one set of replacement seal plastic rings, a cleaning brush, a plastic but rather good grinder and a filling aid.

A lot of components are made of plastic but despite this fact one of the first impressions for this grinder is just how well build it is and when picking it up it gives you a sense of sturdiness. It’s not as small as I have imagined it to be but it’s still considerably smaller than the Mighty.

In many ways it’s very similar to the Mighty both in terms of design and compactness. Basically the Crafty has only one battery and no LCD screen, but is still has the same size for the filling chamber.

The top part is the cooling unit with the detachable mouthpiece which is also made out of plastic but does not subtract from the overall smoke quality and taste. Then in the middle part we have the filling chamber on one side and the battery on the other. And at the bottom we have an ON/OFF switch and LED display on one side and the charging socket and filling chamber tool on the other.

After you’ve unpacked the vaporizer one of the first things that is recommended you do is to fully charge the battery. Usually the device ships with an 80% charged battery but that might vary on how old the device is. A full charge however for this vaporizer takes about 2 hours which I found translates into just short of a full hour of usage. This is not bad considering that this vaporizer can also be used while it is plugged in for charging. However it does need to be charged a bit if it is completely drained in order for it to work plugged in. That means that if you have a completely drained vaporizer and what to use it instantly you will have to wait a while before using it. Also it’s nice to see that the charging socket is a micro-USB which makes it very convenient. And as a side note, you can also use a 12 volt car adapter for charging.

So in order to charge the device simply remove the orange filling chamber tool at the bottom and connect the USB cable to the charging socket of the vaporizer and to the power adapter and then plug the power adapter to a power socket.

After you have plugged it in the LED display lights up green-red-blue for a brief moment and the vaporizer will also vibrate, this being a functional check and indicates that charging has begun. Blue flashing indicates the battery is up to 30% charged, rapidly flashing blue light means it’s between 31 and 60%, slow-flashing blue light indicated a battery charged level between 61 and 96% while steady blue light indicated a fully charged battery. So when there is no more flashing the battery is fully charged. I also want to note here that this vaporizer has a similar indicating system when you shut the device of, so as to communicate how much battery is left after each vaping session and to let you know when it’s time to charge the device in order to have it ready for your next vaping session. So the device it shut off if there is a steady blue light it means it’s 64 to 100% charged, slow-flashing blue light means 32% to 64% left, blue rapidly flashing means between 1 and 32% left, while a blue flashing light means a completely discharged battery.

Similar to the Mighty, in order to access the filling chamber you simply twist-off the top cooling unit.

Then you will be able to see the heating chamber which is of similar dimensions to the one found on the Mighty and can pack around 0.3g.

Packing this oven nice and tight has to be one of the most fun things as the included filling aid and the filling chamber tool.

This filling aid, that looks much like the included grinder, is a smart 4 piece tool that helps you pack the oven without any spillage.

And it works like this. You have a filled filling aid which is filled by removing the upper cap and simply filling up the container.

It is recommended that you pack the material completely up to the plastic rim. Make sure the packed material has a nice density too it – you can push the material with the help of the filling tool – but it’s not too tight as this is vaporizer uses is a combination of convection and conduction. And for this reason in case you fill the oven only half way, it is recommended that you use the liquid pad on top of the herb as by doing so you will get optimal results. In fact this vaporizer handles smaller amount very well with the help of this liquid pad.

After you’re done with the filling process you can screw the cooling unit back on and press the power button for the vaporizer to start the heat up process. You will notice the LED light turn red and vibrate once which signals that the heating process has begun and it will turn green and vibrate twice once the it has reached the temperature of 356 F (180 C) which is the default temperature setting. It will take approximately 90 seconds for it to reach that temperature.

The smartphone app works like this. You download the CRAFTY App, make sure Bluetooth is activated and hit the power button on the vaporizer. Then as you open the app you will be asked to introduce the serial number of your Crafty which you can find on the type label on the underside of the device.

And besides the temperature there are a few other things you can control via the app, like the LED brightness, Charge indicator and Vibration settings.

Now that we’ve covered everything on how this vaporizer works, it’s time to make some notes of how it performs. I’ll start by stating that I had high expectation given the reputation of Storz & Bickel products and I’m happy to report that those expectations have been met once again with this portable vaporizer.

In terms of vapor quality this has to be one of the best hand-held vaporizers along with the Mighty. It produces a dense, pure and very aromatic vapor which I have to say is better than other desktop vaporizers I have used in the past. The combination of convection and conduction heating is surely contributing to the high quality of the vapor. One more thing I want to add it that this vaporizer is also very good for micro-dozing – consuming smaller amount – especially with the use of the liquid pads. And I haven’t even mentioned the fact that this vaporizer works just as well with solid concentrates and liquids.

Also worth mentioning that the draw resistance is not that harsh and also the mouthpiece which is made out of plastic did not take from the overall quality of the smoke. And another thing worth mentioning is the auto shut-off function that basically it set to 60 sec in order to save battery life. Some people might find it annoying but when you hit the power button the shut-off timer is reset as well as when you take a long draw as the vaporizer detects the lowering of the temperature in the oven. I did not find it that much of a hindrance when you also consider that if it does happen to shut-off it will alert you by vibrating and you can simply push the power button then and it will only take a few seconds to reach the temperature you were at. So from my point of view no problems there.

Then when is comes to cleaning this vaporizers, that a relatively easy process. It’s recommended that you use the cleaning brush to clean out the over after each use and every once in a while you also fully clean the cooling unit by taking it apart and dipping it in isopropyl alcohol.

Overall this is one of the best portable vaporizers on the market, delivering consistent and high quality vapor. The device comes with a 2 year warranty if which is good enough given the manufacturers reputation of delivering some of the best products on the market. So if you’re looking for a portable vaporizer that might not necessarily excel in terms of portability but delivers the absolute best in terms of vapor quality then this is the vaporizer you will want to get. I wholeheartedly recommend it.