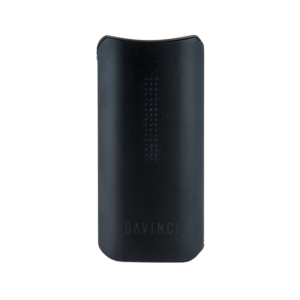 The DaVinci IQ vaporizer is a sleek premium portable dry herb vaporizer that has an all ceramic air-path, a digital 51 LED grind display and a removable battery. If you’re looking for a vaporizer that is very discreet, has a simple loading process and is very portable while also producing some of the best vapor among all the conduction vaporizers then this is the right vaporizer for you.

One of the first choices you will have to make is which color you would like. In total there are four available colors to choose from: stealth, blue, copper and gunmetal.

Given the exterior finish I can say that all colors look amazingly good so it’s just a matter of personal preference here. The black stealth model is the most popular one, but as I said all colors look incredible.

This is what you get in the box: the actual DaVinci IQ vaporizer, the DaVinci tool, USB cable, the keychain with a tool, one cleaning brush, the extended mouthpiece/10mm water tool adapter, a carrying can and 9 cleaning swabs.

Everything from the box to the carrying can is very well designed and will stand as very well built products. The anodized exterior aluminum has a very nice touch and feel to it and given the height of the vaporizer, it fits perfectly into your hands making it probably one of the most stealth portable vaporizers on the market.

On the front of the vaporizer there is the “DAVINCI” marking beneath the 51 LED display that can communicate several things as the temperature, the level of the smart path setting, battery life, boost mode activating, cooling down and also has the stealth option in order to dim the LEDs. On top of this display, the IQ also features a vibration feedback system in order to alert to user of when the set temperature is reached and when it automatically shuts off.

While on the back of the vaporizer is the micro-USB charging socket.

On one  side of the vaporizer is where the controls are. There are just three buttons, one being the power button and two up and down buttons. But with only these three buttons you can control a lot of things which we will cover as we get to talk about them.

Then on both ends of the vaporizers we have magnetic lids. The bottom lid is where you will find the loading compartment which is very well designed, a polished finish that makes it very easy to load the oven but more on that in a while. And then the top lid is where we find the mouthpiece and it opens up to reveal the air-path compartment – which the people at DaVinci branded as the “flavour chamber” and we’ll talk about it a bit later – and the battery compartment as this vaporizer features a 3500 mAh 18650 removable battery.

Since I’ve mentioned the battery, I want to mention the fact that I like to see that DaVinci included a removable battery. Most other premium portable vaporizers do not. The battery last about 70 to 80 minutes which is quite good, but is does take around 3 hours for a full charge which is longer than with other premium vaporizers. But it’s also worth noting that you can use the vaporizer while charging and there is also the option of purchasing an extra battery (or several for that fact) along with a 18650 battery charger which would have things very convenient in terms of always having battery for your vaporizer either at home or on trips.

So with the vaporizer fully charger or charging use can start to put it in action.

First you will need to load the oven which is accessible by opening the bottom lid, as mentioned earlier.

It is recommended you pack the oven nice and tight and it can fit around 0.3-0.4g of material. You will notice just how easy loading the oven will be given the polished finish. Also notice the pearl that fits perfectly within the oven and along with the oven is made out of zirconium as are the flavor chamber component and mouthpieces. In fact the entire air-flow is made from this material. This material is strong, durable and impressive in terms of thermal conductivity (has low thermal conductivity).

The pearl from the bottom also helps with heat distribution in the oven which results is better vapor quality. With this pearl you will notice that all your material will be used because you also get heat from the bottom and this along with the 360 conduction oven produce great overall results.

Now that you have the oven packed there are just a few of more things I’d like to go over before stating a vaping session.

First there are the mouthpieces. As mentioned earlier there are two available options. One is the rather flat mouthpiece that is very good in terms of keeping the vaporizer as stealth as possible but I found it to have a bit more draw resistance.

And the second option is the extended mouth piece that can also be used as a 10mm water tool adapter. It’s the one I prefer best at the draw resistance is better and the vapor quality as well.

This mouthpiece can also be used with various accessories from DaVinci or other water bongs and such. In fact that’s what it was designed for, but I just prefer to use it as my main mouthpiece despite the fact that is does take away from the overall look and discreetness of the vaporizer.

And then have also have the flavor chamber. This is a very interesting components of this vaporizer. In many ways, the DaVinci IQ was built with the main aim of producing the best and purest tasting vapor that a portable vaporizer can deliver. And this flavor chamber components is a testament to that. Since this piece is part of the air-path, it too is made out of zirconium.

Now the idea behind this is that you can put some of your herbal material in here (preferably not shredded) in order to infuse additional flavor to your vapor and get exceptional results in terms of flavor. The material you put in here will not vaporize and this little chamber can also potentially be used as an additional storage according to the user manual.

So now that we have the oven packed (with our without the flavor chamber packed as well) it’s time to power up the vaporizer by hitting the power button 5 times and see how it performs and also discover some of the other features it has to offer.

Once you’ve hit the power button 5 times the vaporizer will power up, show you your current battery level and then automatically enter in “smart path” mode. There are 3 main ways to utilize this vaporizer and one of them is this smart path mode which is quite a cool feature and it the one I’ve been using the most so let me take a moment and describe what it is exactly.

The LED display will indicate which smart path is active by displaying a number boxes each equivalent to the number of the smart path. One box means smart path one, two boxes smart path number two and so on. To switch between smart paths simply press the up and down buttons.

The second way to utilize this vaporizer is in precise mode. To switch between this mode and the smart path one simple click the power button once. In the precise mode you can set the vaporizer to whatever temperature you wish between the 350 F – 430 F range. You can adjust the temperature with the up and down buttons and the vaporize will heat your material to that specific temperature. The IQ will blink once and vibrate when that temperature is reached.

And the last way you can use this vaporizer is in boost mode. You activate this mode by holding the power button during which the vaporizer will quickly start to heat up until it reached the maximum temperature of 430 F. You will notice the LED display having moving arrows pointing up while in boost mode.

You can choose boost mode if you are in a hurry or just want to finish a session at a higher temperature really quickly while the other two modes are more for normal vaping session. I prefer the smart paths depending on the herbs I’m using.

As mentioned earlier you can set these smart paths to any setting you wish, both in terms of temperature and time duration.

And then there also is the precise temp mode in the app where you can control the temperature and also activate standby mode which essentially cools down the vaporizer to conserve your herbs and after 3 minutes of standby mode the device will turn off to save battery life.

After each session it’s recommended you properly clean out the oven, while a full cleaning is recommended every once in a while basically when you feel that the pull resistance is getting heavier. A full cleaning is a fairly simple process, not any harder than any other premium vaporizer like the PAX 3 or Firefly 2. You need to disassemble all the piece, dip them in isopropyl alcohol and use the cleaning wipes for the oven and interior parts of the vaporizer and clean warm water for the exterior.

Overall I have been very impressed with the DaVinci IQ. In many ways it’s a very smart, discreet and reliable vaporizer that delivers some of the best vapor with dense clouds. From all the portable conduction vaporizers the IQ has to be one of the best with the all zirconium air-path contributing a lot to this as well as the unique flavor chamber. The smart paths are a definite plus as most of the times, with other vaporizers, I would find myself finishing of vaping session at higher temperature and the IQ does this repetitive task automatically. Then there is the replaceable battery system and the mouthpieces as well as the availability of a whole set of accessories. And the best part is the 10 year warranty that gives me piece of mind if anything is to go wrong.

I can’t recommend this vaporizer enough, everything from its design to its functionality recommend it as a top portable conduction vaporizer.